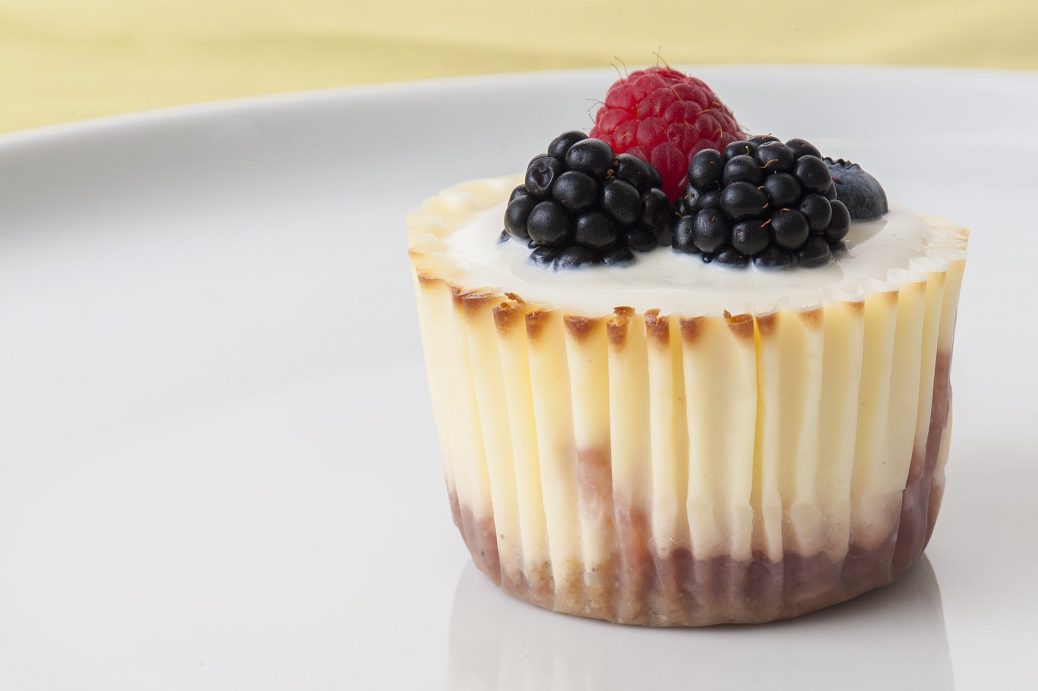 “I love desserts, but they are so unhealthy!” Many times have I heard my friends and colleagues say these words. However, through the years I have found that this is not always true. Desserts can be tasty and nutritious and healthy.
The base ingredients of all these healthy sweets are honey, olive oil, yogurt, burghul, and fruits and nuts. At the top of these healthful products is honey — the first sweetener known to man. The only food that does not spoil, it has been a favorite of humans since the dawn of history.

Modern research has proven that honey is a healing agent. After 20 years of research, New Zealand biochemist Peter Molan has concluded that this bee product cleans and heals wounds better than the dressings and ointments used in hospitals. Additionally, some 50 studies published by the British Journal of Surgery and other publications attest to the healing qualities of honey, especially in banishing infections, promoting skin growth, and preventing scarring.

Olive oil is characterized by its high nutritional and health values. The energy-giving properties in olive oil are more than that contained in any other fruit or vegetable. The calcium content is greater than fruits, vegetables, fish, or shellfish. Fresh cow’s milk contains the same quantity of calcium as olives, but olives have more vitamin A than that contained in milk.
Exceptionally rich in potassium, olive oil, a mono-unsaturated fat, has the ability to reduce the LDL (bad) cholesterol without reducing the HDL (good) cholesterol in the blood. The oil also contains Vitamin E, a powerful antioxidant that plays a role in reducing the risk of cancer and heart diseases. Freshly pressed extra-virgin olive oil contains a chemical called oleocanthal that acts like ibuprofen. People from around the Mediterranean (the greatest consumers of olive oil) have the lowest rate of cardiovascular diseases compared to peoples of the western world.

Yogurt, more easily digestible than milk, is ideal for the aged, the pregnant, the young, and the sick. In addition, it is believed that regular consumers of this fermented milk tend to have clear skin and find no problem in enjoying a good night’s sleep. In a recent study, Japanese researchers found that eating traditional yogurt reduces the malodorous compounds that cause bad breath.

For those wishing to cut down on the amount of fat, cholesterol, and calories in their diets, yogurt made from skimmed milk is a godsend. In preparing meals, brands labelled low-fat and low-cholesterol can be substituted for mayonnaise, sour cream, or similar products. This will constitute a tremendous improvement in their diets — at times working wonders.
Called by some “the noblest food achieved by wheat,” burghul has become a sought-after food by vegetarian and other health-conscious people in North America. The cooking of the wheat preserves most of its nutrients, even when some of the bran is removed after the cooked grain is crushed. The calcium, carbohydrates, iron, phosphorous, potassium, vitamin B, and protein content are almost all retained, and it will last for years without loss of food value and any other type of deterioration.

All fruit and nuts go well together and are excellent for the diet. Fruits contain natural sugars and are among the gentlest natural laxatives in the world. Fruit also has a unique ability to relieve intestinal disorders, and its juice helps to induce sleep. Some naturalists assert that fruits such as figs increase the strength of the young and help preserve the elderly, making them look younger and less wrinkled.

Nuts are considered at the top of the list when it comes to healthy protein foods. While they tend to be very high in calories and fat, most of the fat is poly-unsaturated or mono-unsaturated. Used often in Middle Eastern, Mediterranean, and Indian cuisines, they are an excellent addition to vegetarian diets.

All these ingredients make for healthy desserts — one can simultaneously glory in the sweet taste and the healthful benefits.

Banana yogurt dessert
Serves 4 to 6
This dessert is simple to prepare and a healthy conclusion to any meal.

Thoroughly combine yogurt and honey in a bowl. Stir in banana slices, then chill and serve.

Burghul and pineapple pudding
Serves 8 to 10
Burghul cannot be excelled as a nourishing food. It has more food energy than cornmeal; more iron than rice; less fat than uncooked wheat; six times more calcium than cornmeal, and three times more than rice; and more vitamins than barley, cornmeal, or rice.

Preheat oven to 350° F.
In a casserole, place all ingredients then thoroughly mix. Bake uncovered for 1 hour or until the top turns golden brown then serve hot. If a sweeter version is desired, after removal from the oven, drizzle with honey. 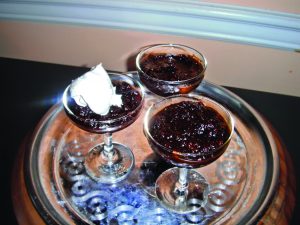 Date fruit cup pudding
Serves about 4
In the Middle Eastern lands, where the date palm carries an aura of mystery and romance, there is a common belief that it is the oldest cultivated fruit tree in the world.

Place water in a pot and bring to a boil, then add dates. Cook and stir over medium heat for 5 minutes. Stir in the honey, raisins, and cloves and cook uncovered over medium heat for 5 to 7 minutes, stirring constantly until thickened. Stir in lemon juice, then cook uncovered and stir for a further 3 minutes. Place in small dessert cups. Top with whipped cream just before serving. 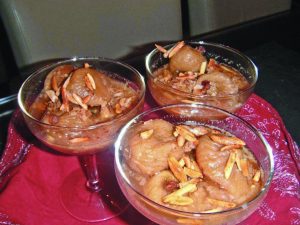 Figs in syrup
Serves about 6
One of mankind’s most ancient foods, the fig is the second fruit mentioned in the Bible. It dates back to the Garden of Eden where Adam and Eve made garments from its leaves to hide their nakedness and restore their dignity.

Place sugar, lemon juice, ground almonds, cinnamon stick, aniseed, and water in a small saucepan, then bring to boil. Drop figs into this mixture, then cover and gently cook over low heat for about 40 minutes or until figs plump up. Stir occasionally and add more water if necessary.

Remove the cinnamon stick. Transfer figs with their syrup to a serving bowl, sprinkle with almonds, and serve.

Place 4 tablespoons cheese on each of 4 plates. Slice and arrange two figs around ricotta cheese on each plate. Sprinkle walnuts over cheese and figs, then drizzle with honey and serve. 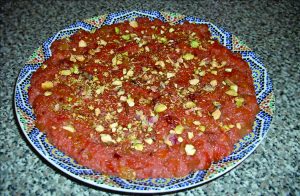 Fruit dessert
Serves 6
In North Africa, desserts are often soaked in honey or use honey as a main ingredient.

Transfer to a serving platter and allow to cool for 1 hour. Sprinkle with pistachios just before serving.

Pomegranate and almond delight
Serves 6
Quick and easy to prepare, this simple dish is attractive, tasty, and healthy.

Thoroughly mix all the ingredients until the honey coats all of the pomegranate seeds and almonds; then place in a serving platter and chill before serving.

Pomegranate and rice dessert
Serves about 6
To remove the seeds, press the pomegranate and roll by hand on a hard surface, then remove the stem with the surrounding pulp. Slightly score the outer skin with a sharp knife from top to bottom at one-inch intervals. After this, the fruit can be easily broken in pieces with the fingers and the ovules removed.

Place rice, raisins, and water in a saucepan then bring to boil. Turn heat to low, then cover and simmer for 20 minutes or until the rice is cooked, stirring a number of times and adding a little more water if necessary. Turn off the heat, stir, then re-cover and allow to sit for 30 minutes. Transfer to a serving bowl and allow to cool, then stir in remaining ingredients, except cinnamon. Cover with plastic wrap and chill in a refrigerator for an hour. Just before serving, sprinkle with cinnamon.

Stewed apricots
This sweet is very good spread on toast or for dessert. Stewed apricots will keep in a refrigerator for a long period of time.

Place apricots and water in a bowl then allow to-soak overnight.

Thoroughly combine bread and dates in a mixing bowl and set aside.

In another bowl, combine remaining ingredients, then pour over the bread and dates. Thoroughly combine, then place in a greased casserole and bake in a 300° F preheated oven for 50 minutes. Serve hot from the casserole.