There is a common misconception that the evolution of hunting weapons moved from spears directly to bow and arrow. However, most people are surprised to learn that between these two instruments, a “missing link” exists.

The missing link I refer to is a weapon called an atlatl (pronounced ot-lot-tal). The atlatl is simply a small spear-throwing device that provides leverage to throw an approximately 5-foot-long dart as fast as 80 or 90 miles per hour. The dart is pushed by the atlatl, which acts as a lever. As such, the motion of the human arm is amplified and that amplification results in a deadly projectile.

The dart resembles an arrow that’s been scaled up a bit. The typical size used today is a shaft that’s approximately five feet long and a half-inch in diameter. The atlatl itself is about two feet long and varies in design from person to person. At the forward end is a handle, sometimes made of loops of rawhide and on some models there is a place for the dart to rest. At the rear end is a small projection made of a wooden dowel, a bone, or an antler. This projection fits into a concave pocket at the rear of the dart. The projection is what actually pushes the dart.

Though it isn’t a critical component, historically, some cultures placed a weight or “bannerstone” at the middle of the handle to provide either more momentum or stabilization. 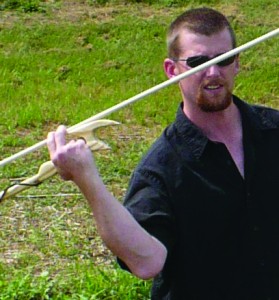 The finished atlatl is both simple and elegant.

There is proof that nomadic bands of hunter-gatherers making their way through North America thousands of years before the birth of Christ were using the atlatl effectively on bison, elk, and deer. It’s likely that these tools were even used to take down woolly mammoth and mastodons. In fact, some theories reason that the invention of the atlatl may have been a contributing factor to the extinction of the larger beasts!

Though it’s likely that they were used first in Europe, atlatls have been used on almost every continent, including the Arctic, where they are still used by native peoples (there they are called nuqaq). Though the atlatl traveled from Europe to North America via the Bering land bridge, it’s likely that the weapon did not have only one source of origination. This is evident by the fact that Australian aboriginal people used an almost identical device called a woomera.

The modern name “atlatl” comes from a similar Aztec word; these weapons were revered in their culture. Atlatls were still in limited use in that culture in the 1500s. When the Aztecs realized their arrows would not penetrate the metal armor of the invading Spaniards, they resorted to the atlatl. They found that the darts would easily pin the Spaniards inside their own armor. The heavier darts pack a more powerful punch at speeds that are slower than arrows shot from a bow.

The atlatl takes some skill to use, which is the reason some people give for the native peoples’ abandonment of the atlatl in favor of the bow. However, it is more likely that the atlatl was abandoned due to a change in the type of stone points that the people used.

There is a strong misconception that the atlatl is inferior to all other hunting methods except for hand-thrown spears. This myth is very persistent despite the following facts:

A modern hunting arrow carries around 540 grains of weight at a speed of about 220 feet per second (FPS). The kinetic energy, that is, the force of impact, is about 58 foot-pounds.

Now, let’s take a look at momentum. Momentum is different than kinetic energy. Kinetic energy is the stored energy in the projectile. Momentum is the ability of an object to stay in motion. This is significant in hunting because the higher the momentum, the more likely the projectile to penetrate through tough hide, bone, and flesh.

Momentum is represented by the formula: momentum = mass x velocity.

In addition, while arrows and bullets have almost no flex, a long atlatl dart will flex upon impact — losing less energy less quickly than the other projectiles.

By both measures, an atlatl dart is a more effective killer than an arrow at close range. Yet a bow and arrow is a legal hunting device in most, if not all, states. Even a crossbow is legal despite seriously embarrassing shortfalls in the formulas I mentioned above. All can do the job, atlatl included.

There is no explicit mention of atlatls in most hunting regulations. However, because they are not mentioned as a legal implement, they are, by proxy, illegal for some (if not all) types of hunting.

It is more common to find that an atlatl is legal for limited small game hunting. However, using the atlatl on deer-sized game is a different matter.

Alabama has allowed the use of spears and atlatls to be used on deer for some time now. Missouri added an atlatl hunting season in 2010. No other state currently allows atlatl hunting for deer in any specific form.

The proposed atlatl hunting season in Pennsylvania was squashed over concerns that too many deer would be wounded and die painful deaths. Images were conjured of deer roaming the backwoods with 5-foot-long spears jutting from their bodies. Unfortunately, trotting out this straw man was enough to effectively kill Pennsylvanians’ ability to hunt with a weapon that allowed our distant ancestors to eat and thus keep the species alive.

The atlatl does suffer from a reduced range due to the heavier projectile and slower speed. Which begs the point: Why would someone hunt with an atlatl except for the challenge? Those likely to hunt for the challenge would ensure they were skilled enough. This is a niche and likely will remain that way. There simply aren’t thousands of deer roaming the woods of Alabama dying painful deaths from atlatl spears.

The belief that people will wound many more deer with an atlatl doesn’t ring true with me. A bad shot with a rifle can wound deer as far away as a few hundred yards. A bad shot with a bow and arrow can wound deer out as far as 50 yards. An atlatl hunter would be absolutely limited to the effective range of the weapon; fewer viable shots result in fewer deer killed, which limits the number wounded.

Despite the atlatl’s perceived shortcomings, the weapon is seeing resurgence in use. There are several companies selling modern versions of historically inspired atatls, darts, and other atlatl equipment. The most popular is Bob and Cheryl Berg’s Thunderbird Atlatl (www.thunderbirdatlatl.com).

Currently, target competitions and small game hunting using the atlatl are slowly growing in popularity and as evidenced by Missouri, some states are starting to recognize this weapon as a viable hunting method. 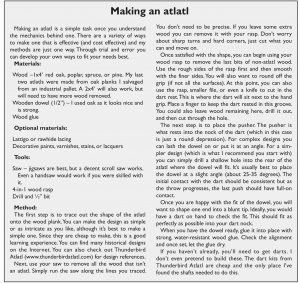 I believe hunting to be as much about connecting to our ancient roots and to nature as it is about providing food for the table and participating in a challenging sport. The disconnect between the need to kill to survive and the challenge of doing so is greater than ever. Understanding the history is essential for future generations. In my opinion, there is no better way to connect to the past than by holding in one’s hand the tools of that time.

In the video below, the author demonstrates how to throw the atlatl.