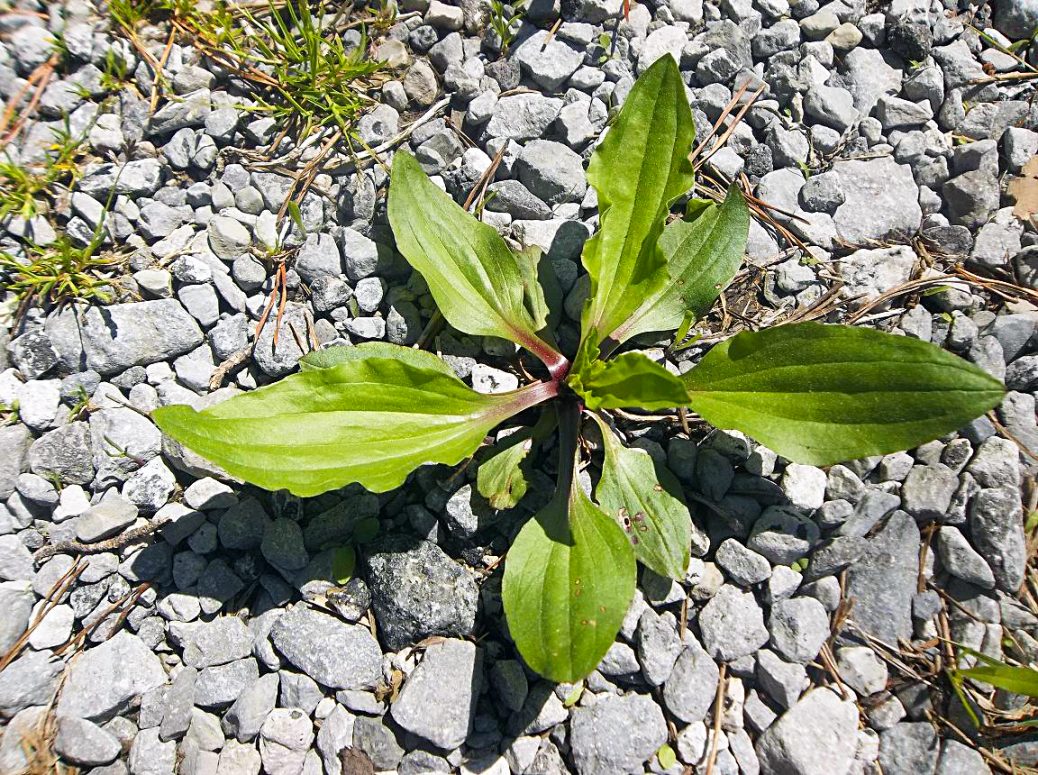 There is much talk these days about preparing for hard times. Survivalism has gone mainstream. But one of the most important facets of preparing for the worst is knowing what lies at your feet.

Not long ago, my husband and I were living in a large Southern city, and we were discussing what might happen if some “simple” catastrophe happened, such as the electricity goes off and stays off.

Most stores, limited to just-in-time delivery, would soon sell out of their three-day supply of goods, and the shelves would be empty.

Even though food is number four on the list of the top things you need to survive (after air, water, and shelter), it’s probably the first thing most people would think about.

In most lawns, homeowners struggle to rid their pristine landscape of some of the most beneficial plants to man.

andelions grow almost everywhere, and actually do not compete with grass for nutrition, since their roots go much deeper than any sod. Yet, they are the poster child for “noxious weeds” on the front of most bags of household herbicide.

A hundred years ago, our grandparents looked diligently for the first dandelions to come up in the spring, and would make a tonic from the leaves that renewed their iron levels after a winter of simple foods.

Tender, young dandelion greens are one of the wild edibles that I pick for a fresh salad. They are high in vitamins A, C, and K, and a good source of calcium and iron. An added benefit is that the flowers are good for producing a food-grade yellow dye. In the 1800s, women often used the dandelion flowers to color their butter a rich yellow hue. 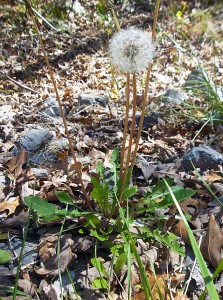 American elder (Sambucus canadensis) grows from the Great Lakes down through the heart of the South. Syrup made from elderberries is a traditional remedy for influenza. Studies with the European variety of elderberry (Sambucus nigra) show that it stops replication of the flu virus. The berries of the plant, however, are unpalatable unless cooked or made into syrup or wine. Other species, like the Pacific red elder (Sambucus callicarpa) have inedible or even poisonous fruit.

To make up an effective flu treatment, extract juice from the berries just as you would in making jelly, then add honey and vodka (as a preservative).

One plant that grows virtually everywhere is plantain. The Native American called it “Englishman’s footprint,” because everywhere European settlers cleared land, this cheerful little leaf would pop up. It’s hard to exhaust the supply, since a new whorl of leaves will grow back within a day or two after the plant has been cut to the ground.

Plantain leaves taste best when picked young and tender. They have more iron than spinach, as well as vitamins A and C. They may be cooked like spinach or used raw in a salad.

Plantain is the best itch reliever you can find! If you get into some poison ivy or a child has a bug bite, just chew up a leaf or two of plantain and place it on the irritated skin. You can hold it in place with a bandage.

I have put up little jars of “itch cream” made from plantain, rosemary, and lard. It works just as well as the fresh plantain, but has to be refrigerated to keep it solid. I believe a few drops of melted beeswax added to the mixture would keep it from softening without the need for refrigeration, but I haven’t tried that. 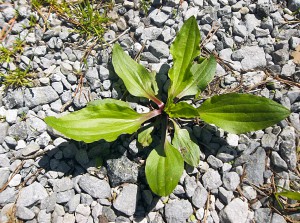 Clover blossoms have a light tang mellowed by a faint sweetness. They can be dried and used for tea, or eaten fresh. I like to throw the blossoms on a salad.

Lamb’s quarters grow throughout the U.S. and most of Canada. They grow almost anywhere the ground has been disturbed. The stem gets as tall as your head, with “goosefoot”-shaped leaves that are silvery on the underside.

One of my dogs recently consumed some rat poison and was bleeding internally; the poison had removed the clotting factor from my dog’s body. I learned the very simple treatment for that was vitamin K. It’s what makes your blood clot naturally.
Lamb’s quarters are also a complete protein, which might come in handy if you are a vegetarian, or you can’t access meat and other customary forms of protein for your diet.

You can boil it in water like spinach, but my favorite recipe is to warm some olive oil in a skillet and stir the leaves in to sauté. You don’t even need to add salt!

A favorite old plant among poor Southerners is poke salad. Growing virtually anywhere in the eastern United States, parts of poke salad are poisonous, and so the plant as a whole gets a bad rap. The tender young leaves can be cooked and eaten like spinach or any other green, but avoid mature leaves, stems, berries, and roots, as these are all poisonous. A favorite recipe when I was growing up was to stir some fresh poke in with a pan of scrambled eggs.

In colonial days, the purple poke berries were used in ink, and they also make a good purple dye.

Growing throughout the U.S., Queen Anne’s lace is a wild carrot. It runs the risk of being confused with poison hemlock; the plants look similar – tall green stems topped by lacy umbels of small white blossoms. There are two good ways to differentiate between them: Most of the mature flower heads of the Queen Anne’s lace have a black dot in the middle of the flower umbel, which hemlock doesn’t have. And any part of the Queen Anne’s lace smells like carrot; you can snap a stem in half or break a root, then sniff.

Queen Anne’s lace roots are not as big or as tasty as the domesticated carrot, but they are nutritious and can be cooked just like you’d cook a carrot. 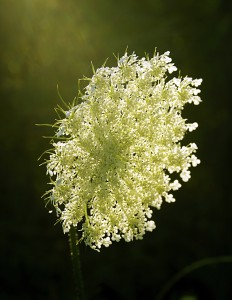 Sassafras grows throughout the eastern U.S. In the southern Appalachians, sassafras is usually a large shrub, but can grow into a spindly tree 30 or 40 feet tall, with young seedlings springing up from its roots. The mitten-shaped leaves make the tree easy to spot in the summertime. Pick a twig or a leaf and crush it, and the wonderful, spicy fragrance is easy to recognize. The roots are the prized part – dig a root, wash it off, and shave bits into a mug. Add boiling water and let it steep for a few minutes. The hot drink is delicious and relaxing. Wild plant identification handbooks say sassafras is “mildly narcotic.” 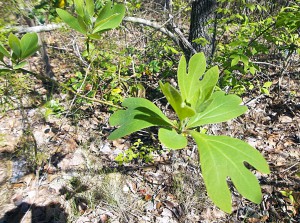 Nut trees grow in most parts of the country, and if you get to the nuts in the fall before the squirrels and rabbits do, you can gather a bounty. Pecans are my favorite, but there are many others. Beech nuts are easy to peel and have a wonderful sweet taste, but they’re very small – about the size of my pinky nail. Hickory nuts and black walnuts are good, but have a very hard shell that you have to work at to open up.

Wild fruits that are available in the southern Appalachians, where I live, include wild blueberries, which we call huckleberries. They’re much smaller than their domesticated cousins, but have good flavor. Wild grapes – “fox grapes” – grow on our mountain and are similar to Concord grapes. Their country cousins, muscadines or scuppernongs, are great to eat, but have tough, bitter skins and large seeds.

Blackberries are ubiquitous throughout the South. I always spy out the location of the brambles in the spring when you can see the white blossoms from a distance. As soon as the blooms disappear, the little white berries appear, and over the next few weeks they turn from white to red to blue-black. When most of the berries are black, you can start picking, returning every few days to pick again, as the red ones ripen up. Blackberries make wonderful jelly or cobblers… or you can just eat them fresh from the bush!

Persimmons grow on a tall tree, and are horribly bitter when they’re green. But once the fruits ripen, you can smell the sweetness from many yards away. They turn orange as they ripen, and begin to drop from the tree. Deer love these! If you don’t favor the sticky sweetness of the persimmon, you can always put a deer stand up in the tree and just wait for the deer to show up.

Before harvestng, educate yourself as to the usable wild plants in your area – as well as the toxic look-alikes. This is why I don’t harvest mushrooms. I have never taken the time to learn what’s safe and what’s not, and there are too many out there that will kill you!

Second, be a responsible “farmer” of wild plants in your community. Harvest what you’ll use, and use what you harvest, and always leave some to grow the next crop.

Karen M. House is a writer living in the mountains of east Tennessee with her husband. They have four children – all grown now – and three grandchildren.