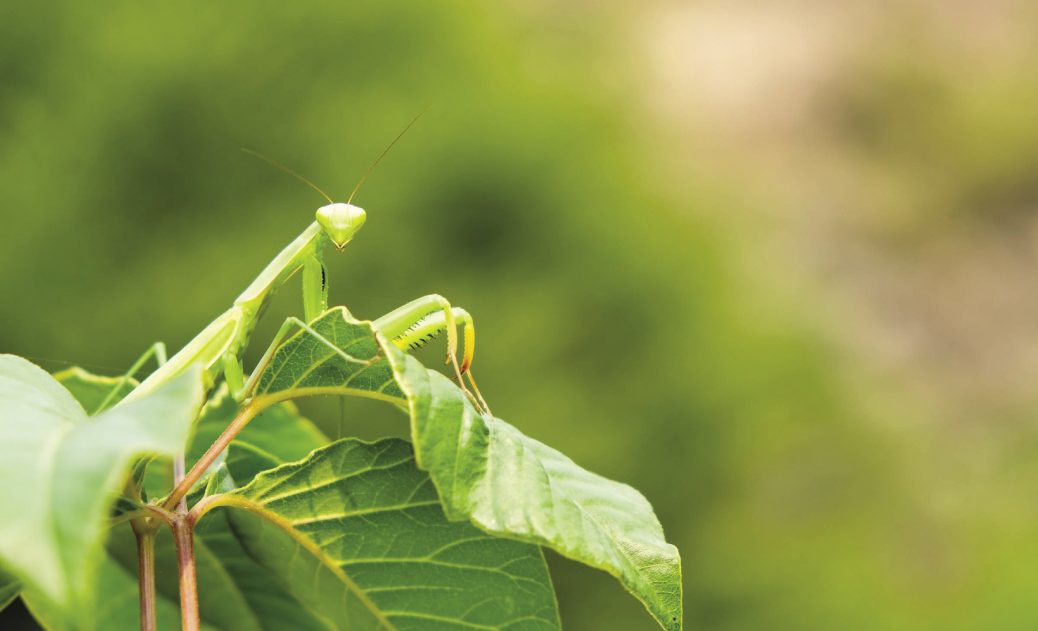 Over the teeth and past the gums, look out stomach here it comes. I don’t know if that’s the prayer being said by the Praying Mantis but I sure hope he gets his dinner. I’ve got too many harmful insects stalking my vegetable garden looking for a tender, tasty treat.

Named for its heavy front legs, held in a position that suggests it is praying, the Praying Mantis is one of the top insect predators. The name mantis comes from the Greek word for prophet.

These six-inch-long insects are usually green or brown or a combination of both. This coloring allows them to blend in with their surroundings so they can easily ambush other unsuspecting insects. Their triangular head tops an elongated thorax giving them the ability to turn their head 180 degrees to scout for prey. They have a large compound eye on each side of their head, with three additional smaller eyes near each one, giving them binocular vision. As small as they are, they can pick up movement up to 60 feet away. Now that’s a bug with a vision! Mantises also have ultrasound ears to help locate prey. If an insect doesn’t happen by during feeding time, the mantis can see or hear one a long way off and will stalk them. They have a strong set of wings, but usually only use these to escape danger or move greater distances in search of food. The Praying Mantis is a fearsome looking critter, but they pose no danger to people. They are just friendly bug eating machines. With qualities like this, the praying mantis needs to be in every garden to help protect our produce.

The praying mantis is the only insect predator fast enough to catch flies and mosquitoes. They can snatch a fly so quickly you can hardly see the movement. When they catch a large insect, they use the spikes on their legs to pin it down until dinner is over. Beetles, butterflies, crickets, flies, grasshoppers, moths, spiders, and just about any other insect, including another praying mantis on the menu. They are the only insect predator that hunts at night as well as during the day, giving your garden ‘round the clock protection. When feeding, the Praying Mantis bites the neck of its prey to paralyze it and then begins to chow down while its feast is still alive. 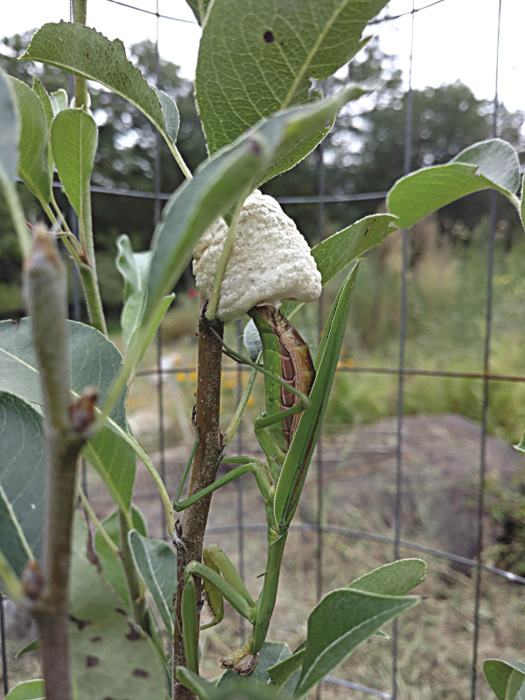 The Praying Mantis mates in the fall, and the female is known to eat her mate while doing so. The female lays hundreds of eggs in a large, frothy mass about an inch long known as an ootheca. The masses can be found attached to twigs, in blackberry brambles, and in similar areas of thick vegetation. Females usually die a couple weeks after laying eggs, and males that survive mating season will succumb to the cold weather as fall sets in. Check the plants in your garden at the end of the season for these egg masses and preserve them for hatching rather than disposing of them with your garden waste. The ootheca hardens as it dries and then feels a lot like foam insulation. The eggs are sometimes preyed upon by parasitic wasps. Birds will tear a hole in the ootheca to the eggs. The eggs stay intact in the case until spring when the baby nymphs are born. The nymphs look exactly like the adult in miniature form, however they lack wings or reproductive organs. The young start out by eating aphids, leafhoppers, nymphs, small flies, and each other. The mantises born in the spring undergo shedding of their exoskeleton several times as they grow into adulthood. At the last molting and stage of development, wings emerge.

Praying Mantis egg cases can often be purchased from garden catalogs or scavenged from overgrown fields and placed around your property in late winter. When they hatch, you’ll have some excellent pesticide-free insect control.

A DIY ootheca cage ready to hang on the garden fence.

Late summer through winter is the time to scavenge for the egg cases and relocate them where they benefit you most. But don’t do what I did as a youngster. Back then local farmers were paying 50 cents each for an egg case. Being a young man with a developing entrepreneurial spirit, one winter day I wandered the fields and brushy woodlots in my neighborhood collecting a dozen or so of the egg cases to sell. I brought them home and put them in my top dresser drawer for safe keeping until I got in touch with a farmer or two. Unfortunately I waited too long and the warmth of the house sent the eggs the signal that spring was here. I came home from school one day to a very upset mother. All the egg cases hatched that day, flooding my bedroom with thousands of baby bugs. Mom was not too happy about the mess she had to clean up.

When scavenging ootheca be sure to collect plenty of the plant stem it’s attached to. You can use twist ties to reattach the stem to other plant branches near your garden. When relocating an ootheca be sure to position it the same way the Praying Mantis made it, with the pointier end up, so rain runs off. Be sure to relocate them in the thickest cover you can find to help protect the eggs from birds. You can also enclose the ootheca in a square cage made of ¼-inch hardware cloth with the ootheca centered in the enclosure to keep prying beaks from stealing the eggs. I hang my ootheca cage in my vegetable garden so the newly hatched nymphs can immediately begin to control pests in my garden. When scavenging, be sure to leave a few egg cases behind to repopulate that area. The eggs a Praying Mantis produce is the only thing that ensures the continuation of the species for the following year, so protect them if you can.

Allen Easterly operates a small hobby farm in the heart of the Shenandoah Valley in Virginia. He raises meat chickens, laying hens, rabbits, quail, and squab for sale at local farmers markets. Follow RendezvousFarm on Facebook or contact him via www.RendezvousHobbyFarm.com