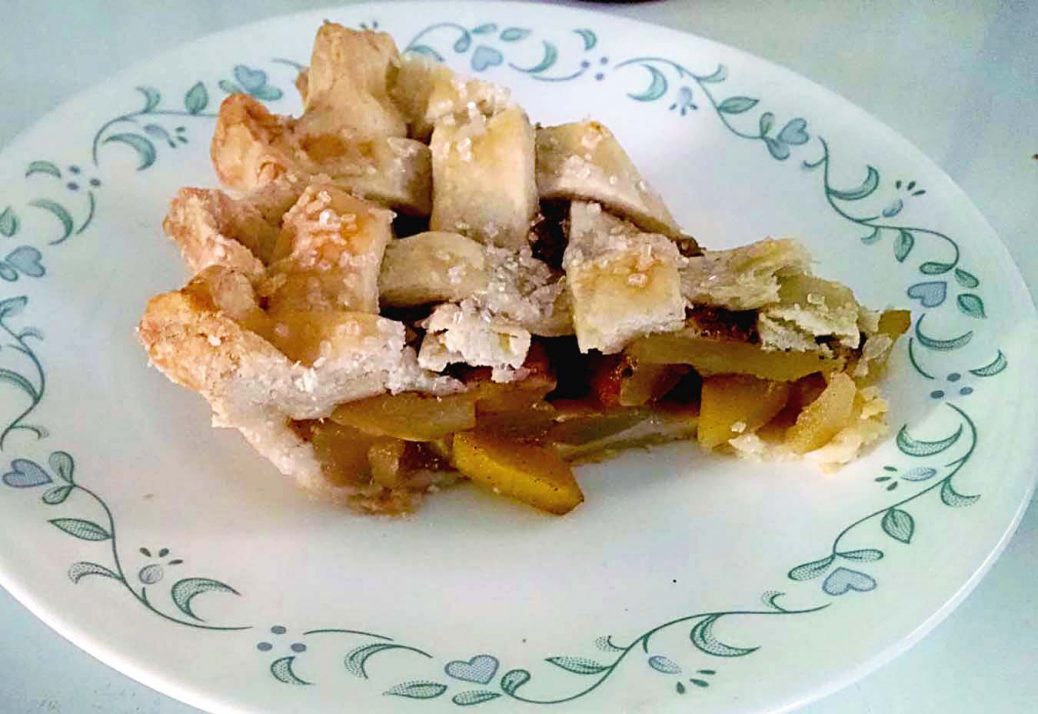 I still remember chuckling as a dejected looking young couple, their arms loaded with weapons-grade zucchinis, walked out of our church last summer. Earlier that day, they had carried in the same number of zucchinis, obviously hoping to foist them off on some other (already zucchini-glutted) church members.

I chuckle, because I was in their shoes once. But then I figured out that zucchini is the best fruit in the garden. Fruit? Yes, fruit. That is, if you don’t mind deceiving your taste testers.

After moving to our new place on undeveloped land, we planted an orchard, which meant that we were several years off from having any of our own fruit. Apple pies were not on the menu anytime soon. And, since we weren’t in the sub-tropics, lemon pies and pineapple were even less likely. Unless …

For several years I’d canned the imitation pineapple recipe that had been passed around on the internet. Why couldn’t I make other “fruits” using different fruit juices, as long as I kept the acid level high enough so the product could be safely canned? 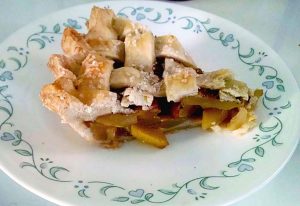 This “apple” pie is delicious!

The results are delicious and easy to make. Zucchinis are plentiful (and therefore cheap) and much easier to prepare than apples. For most recipes, I follow the same process. I use the gargantuan zucchinis — those are the best. Slice them in half lengthwise, from stem to blossom end. Use a spoon to scoop out all of the seeds and any stringy fiber. Then peel them. As you peel, you’ll notice that the surface of the zucchini starts getting very slippery. If you hold the zucchini with a paper towel, you’ll be able to keep it from shooting across the room.

Once you’ve prepared the zucchini, you’ve got the beginnings of any of the recipes below — except for the cinnamon spiced “apple” rings (which are cut up differently to form the rings). 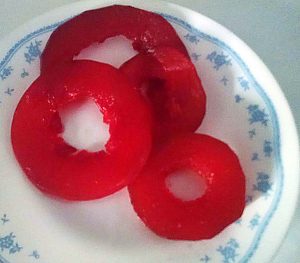 These “apple” slices can be dehydrated for a tasty treat.

Boil sugar and vinegar. Add zucchini. Stir so all the zucchini is soaked by the vinegar mixture. Boil until translucent, about three minutes. Remove from heat, let cool. When cool, drain off vinegar, until it doesn’t drip anymore. Mix with one cup of sugar and 1 Tbsp. of cinnamon. Sprinkle over the drained slices, then toss so slices are evenly covered. Dehydrate as you would apple slices.

Mix sugar, salt, cider vinegar, and water in large pan. Bring to a boil. Stir in zucchini slices, until slices are heated and somewhat translucent. Stir gently — zucchini slices can be brittle and will break apart easily. Remove from heat. Scoop slices into sterilized quart canning jars and then pour remaining syrup on top, to fill jars. Process, boiling water bath, for 15 minutes. Makes 7 quarts. To use for pies, drain and then add any thickening agents (flour, cornstarch) and spices before baking, just as you would with fresh apples. 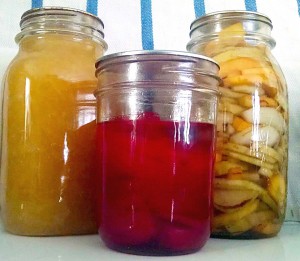 Mix all ingredients. Bring to a boil and simmer for 20 minutes. Fill sterilized jars with mixture, topping with remaining juice to leave ½ inch headspace. Process in boiling water bath, for 25 minutes.

To use filling for lemon meringue pie: Mix ½ cup sugar with 2 Tbsp. of cornstarch. Stir into “lemon” filling. Heat, just till thickened. Pour into baked pie crust, top with meringue and bake (400 degrees, 8-10 minutes) till meringue is slightly browned.

This is the only recipe where I peel zucchinis first before cutting. Slice across, to divide zucchini into sections that are about four inches long. Use a long, thin knife to cut out the core (seeds). After the core is gone, slice zucchini across to make “apple” rings. Soak the rings in lime and 1 gallon water for 24 hours.

One added benefit to using your giant zukes — the seeds are good-sized. Rinse the seeds to remove any fiber. Spread them out until dry to the touch. Place in a bowl and add 1 tsp. olive oil. Stir until seeds are lightly coated. Sprinkle with salt, as desired.

Bake at 400° F for 15 minutes, just until the seeds begin to brown. Stir midway through cooking time, so they dry evenly.
If you don’t care for zucchini seeds, you can always give them to your chickens or other livestock. My cows love the seeds, when they can beat the chickens to them!

Not only will these recipes spare you from seeking out social gatherings so you can give away zucchinis, but you’ll be stocking your pantry with some delicious snacks, appetizers, and baking ingredients.