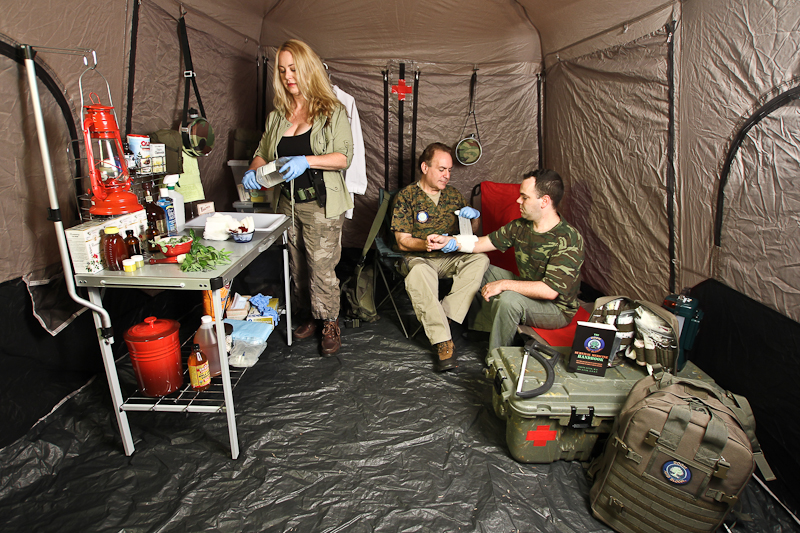 Home canning is a great way to have good things to eat, even in the coldest of winters, and more and more people are learning this useful skill. Indeed, Jarden Home Brands, which makes Ball canning jars, saw a 30 percent increase in sales last year.

Home canning techniques are much advanced from its beginnings about 180 years ago, with many scientific improvements that make it an excellent way to preserve food for later use.

Canned food can have a shelf life ranging from one to five years, although it can be longer under certain circumstances. In 1974, samples of canned food from a ship that sank in 1865 in the Missouri river were tested by the National Food Processors Association. There was no trace of microbial growth and, though not in its original state, was determined to still be safe to eat.

But home canners, and even food conglomerates, sometimes make mistakes; when they do, pathogens (disease-causing organisms) can invade the very stuff that we depend upon for nourishment. One of these pathogens is Clostridia Botulinum.

Clostridia Botulinum is a rod-shaped bacteria found in soil worldwide. The organism is anaerobic, which means that it grows best in conditions where oxygen is absent. In addition, it forms “spores” that survive in a dormant state until conditions favor their development. You might be surprised to know that botulinum spores exist on most fresh food surfaces. Here, they are harmless because the spores activate only in the absence of air.

Clostridium botulinum’s spores are hardy, heat-resistant, and exist just about everywhere. Once in a favorable, oxygen-poor environment, they activate. This leads to the production of certain noxious substances called “toxins,” some of which are so dangerous they have been considered as biological weapons.

There are a number of different botulinum toxins, some of which cause illness in humans, others in animals. This illness, which primarily affects the nervous system, is called “botulism.”

First described as a disease in the 18th century in people who got sick after eating contaminated meats (the word “botulism” is derived from the Latin word for sausage), the bacteria itself wasn’t isolated until near the beginning of the 20th century.

With advancements in home and commercial processing of food, botulism is much less common than it once was. Despite this, over 100 cases are reported in the United States every year.

Although there are various ways that botulism may be transmitted, three types are most common:

Infant botulism: Infant botulism occurs after consuming spores of the bacteria, which activate and multiply in the intestinal tract. The source of infant botulism may be ingestion of honey, which the FDA warns against in the first year of life. Despite this, it’s much more likely to be caused by exposure to soil that contains the bacteria.

Wound botulism: When a wound, even a scratch, is contaminated with Clostridia Botulinum, toxins produced by spores can cause major damage. In recent decades, wound botulism has occurred not so much in accidental trauma as in self-inflicted injury, such as the injection of heroin.

Food-borne botulism: Food-borne botulism in home canning is the focus of this article, and can be seen in foods that are low in acid, with a pH of 4.6 or lower. They include, according to the USDA, red meats, seafood, poultry, milk, and all fresh vegetables except for most tomatoes. Clostridia Botulinum doesn’t seem to find high-acid and refrigerated foods as agreeable.

It should be noted that botulism doesn’t appear to be spread from human to human. When a cluster of cases are identified, it’s usually because the group ate the same contaminated food.

When you eat food containing botulism neurotoxins, a chemical known as acetylcholine is inhibited. This chemical is required for nerve cells to “communicate” with each other and control movement and other vital functions. The end result is paralysis if untreated, but other symptoms are seen earlier, usually within a day or so of exposure. They include:

Some victims experience only a few of the above symptoms. Untreated botulism carries a death rate of close to 10 per cent, usually due to respiratory failure in areas without access to advanced methods of mechanical ventilation. Paralysis of extremities can occur and be very slow to recover in survivors.

A physician can usually suspect a diagnosis of botulism from the history, physical signs, and symptoms of the patient. However, a number of other nerve conditions, such as Guillain-Barre syndrome (recently tied to Zika Virus infection), and even strokes, can produce similar symptoms. Certain lab tests of blood, stool, or vomit are required to provide definitive proof.

Waiting for lab results may not be appropriate, however, and supportive care should be initiated, especially respiratory support. If botulism was likely to come from recently ingested food, many physicians will induce vomiting or even administer enemas to remove as much of the offending substance as possible.

The definitive treatment for food-borne botulism is an “anti-toxin” derived from horse serum. Although it eliminates the ill effects of botulism toxins, nerve damage is not reversed. Luckily, humans can regenerate nervous tissue, although the process may take months of rehabilitation therapy. Full recovery can be expected in a majority of cases.

Although caused by bacteria, antibiotics are effective only in cases of wound botulism, which may also require surgery to remove infected tissue. Although a vaccine exists against botulism, it has been of limited effectiveness and has some unwanted side effects.

Home canners should follow the guidelines set in the U.S. Department of Agriculture’s (USDA) “Complete Guide to Home Canning,” easily accessible online. The guide has been recently updated, so make sure you find the most recent version. Jackie Clay-Atkinson’s book “Growing and Canning Your Own Food,” available through this magazine on page XX is also an excellent guide.

Low-acid and tomato foods not canned according to USDA recommendations present a risk of botulism. Although this article doesn’t claim to be a guide on home canning practices, the USDA suggests that home canners:

• Add acids (lemon juice or vinegar) to some foods.

• Use appropriate jars with self-sealing lids.

• Process jars in a pressure canner for the correct period of time.

If the USDA guidelines are strictly followed, you will prevent the growth of pathogens and, importantly, help form a high vacuum in jars. Good vacuum forms a tight seal which keeps liquid in and germs out.

Why not just boiling?

Botulinum spores are heat-resistant and may survive basic boiling-water temperatures. All low-acid foods should be sterilized at temperatures of 240° to 250°F with pressure canners operated at 10 to 15 PSI. The USDA specifically states that pressure canning is the only recommended method for home-canning meat, poultry, seafood, and vegetables. Boiling-water canners are associated with a greatly increased risk of botulism.

Using proper technique, the time needed to destroy bacteria in low-acid canned food ranges from 20-100 minutes. The exact time will vary based on the type of food, the way it is packed into jars, and the size of the jars.

Even if there is no evidence of spoilage, the USDA recommends that low-acid and tomato foods should be boiled in a saucepan before consuming. At sea level or altitudes below 1,000 feet, boil food for 10 minutes. As water boils at a lower temperature at higher altitudes, add an additional minute of boiling time for each 1,000 foot rise in elevation at your location. Spinach and corn should be boiled for 20 minutes or longer.

Having said this: If you have, indeed, followed the USDA guidelines to the letter, low-acid canned foods may be eaten without boiling if you are certain that:

• Food was processed in a pressure canner.

• The gauge of the pressure canner was accurate.

• Appropriate process times and pressures were used for the size of jar, style of pack, and kind of food being canned.

• The process time and pressure recommended for sterilizing the food at your altitude was followed.

• Nothing has leaked from jar.

• No liquid spurts out when jar is opened.

• No unnatural odors are detected.

The bottom line: If you’re not certain that you followed USDA guidelines, you might consider discarding it.

In addition, Never eat canned foods if the container is bulging, leaks, or has mold. Food should not appear to have become “mushy.” Toss any food that foams or emits a strange odor when boiled.

It should be noted that baked potatoes may also harbor botulism toxin if not eaten hot or stored in the refrigerator. Infused oils with garlic or herbs should also be refrigerated. Don’t leave them out at room temperature.

With some attention to detail, you can safely can your fresh food and avoid the threat of food-borne botulism. g

Joe and Amy Alton are the authors of the #1 Amazon Bestseller “The Survival Medicine Handbook.” For more than 600 articles on medical preparedness in wilderness, disaster, or other austere settings, go to their website at www.doomandbloom.net.

The beneficial side of botulinum toxin

You might be surprised to learn that botulinum toxin may have medical uses. In addition to the anti-wrinkling injection, “Botox,” the toxin can:

• Decrease neuralgia. Neuralgia is a intense, shooting pain that comes as a result of nerve damage or dysfunction, such after outbreaks of shingles.

• Reduce excessive sweating by injections in the underarm or other areas.

• Reduce the sudden urge to urinate caused by an overactive bladder.

• Eliminate twitching or “tics” in eyelids and other facial muscles.

• Decrease tooth grinding and the dental damage it causes.