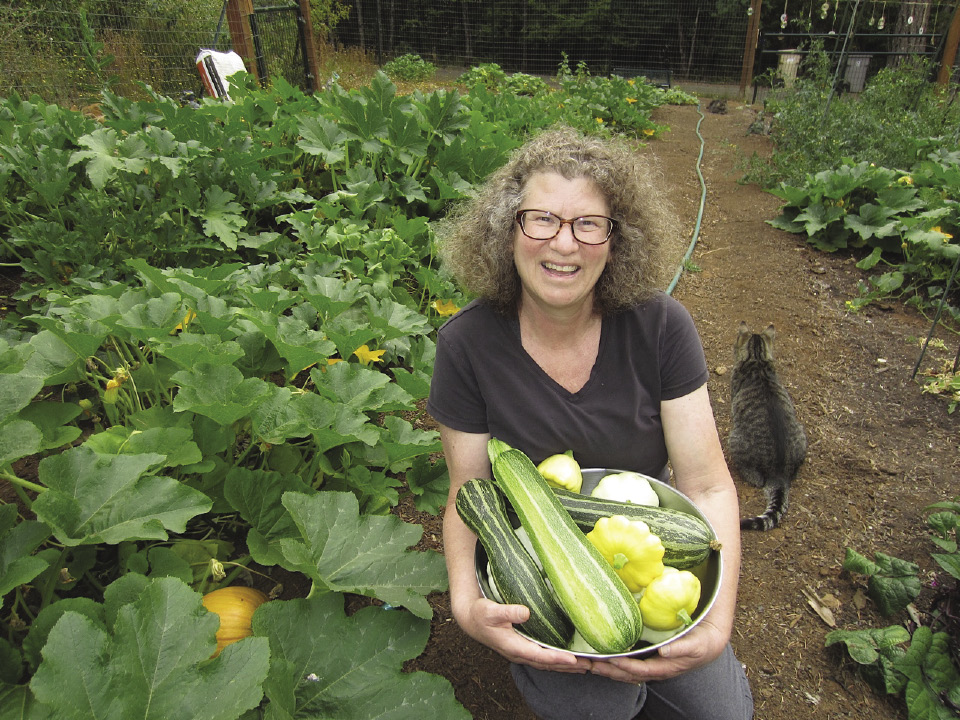 There is an old maxim about exercise: “The best exercise is the one you are willing to do.”

For us rural folk, one of the exercises we are usually willing to do is gardening, because it is part of the lifestyle of living in the country. How lucky for us, because a growing body of scientific evidence says that gardening, even when compared to such strenuous exercises as swimming and jogging, is one of the best exercises a human being can do. The reason is gravity and our evolved need to interact with it.

Ilene Duffy, whose mom, Kathy, suffered from osteoporosis, gardens as a way to help stave off the symptoms of the condition.

Gardening has us bending, digging, twisting, stooping, lifting, carrying, and huffing and puffing to overcome gravity as we plant, nurture, and harvest our vegetables. Swimming lacks the pull of the earth against our bones and muscles, and jogging lacks the constant flexing of our bodies that gardening requires.

Although gardening is good for both sexes, it is especially good for women who are more prone to osteoporosis as they age. Some years ago, in a study undertaken at the University of Arkansas at Fayetteville called Physical Activity and Bone Density Among Older Women, it was found that women 50 and older, who gardened at least once a week, showed higher bone density readings than those who engaged in other types of exercise including jogging, swimming, walking, and aerobics.

The study’s lead researcher, Dr. Lori Turner, then an associate professor of Health and Science at the University, said that research has long shown that weight-bearing exercise can help women maintain healthy bones. “By knowing which exercise provides the greatest benefit, women can design a workout regime that ensures strong bones as they age,” Dr. Turner said.  She added that such preventive measures may reduce the number of people who develop osteoporosis, a debilitating disease that threatens almost 50 million Americans.

“Within our study, more than half the women, 57 percent, showed low bone density,” said Turner. “There is no question that osteoporosis is a problem in our society. But if we persist in only treating the disease, the number of victims will never drop.  We have to find ways to prevent it.”

To gain a comprehensive look at the effects of exercise on older women, Turner looked at the National Health and Nutrition Examination Survey, a data set collected by the National Center for Health Sciences, which contains information on more than 40,000 people. From a pool of women ages 50 and older, she examined how often they performed different activities including gardening, calisthenics, bicycling, dancing, aerobics, swimming, jogging, walking, and weight training. Turner’s research showed only two activities to be significant in maintaining healthy bone mass: gardening and weight training.

Turner said: “We hadn’t expected garden work to be significant. Gardening is sometimes taken for a dainty activity. It’s not. There is a lot of weight bearing motion going on in the garden, like digging holes, pulling weeds, hoeing, and pushing a mower or a tiller.”

But gardening and other weight bearing exercises are beneficial for everyone. Doctors noticed years ago that patients recover more quickly after major surgery if they are made to get up and walk (interact with gravity) the morning after surgery. Previously, patients were thought to need bed rest at the start of their recovery, but patients who were encouraged to walk the morning after surgery, even if only across their room and down the hospital hallway, seemed to jump start their recovery.

NASA (National Aeronautics and Space Administration) is conducting numerous studies today to ascertain the effects of zero-gravity over prolonged periods on astronauts. They have discovered that human cells do not properly grow healthy muscles and bones unless they vigorously interact with gravity. The debilitating effects of the lack of interaction with gravity became apparent when astronauts returned to earth after lengthy stays at the International Space Station. The astronauts can neither walk nor even stand, but must be carried from their re-entry capsules. It turns out the astronauts had lost both muscle and bone quality.

Since it can be expensive to study weightlessness on earth, some NASA earth-based studies have involved subjecting test subjects to six months of bed rest as a way to simulate near-gravity situations. They have the test subjects lie in bed for 60 days, eating, defecating, doing everything while laying down. They are hoping the tests will lead to ways to deal with the effects of zero gravity over prolonged periods. The same muscle atrophy and bone loss happens to these test subjects that happens to hospital patients who are bedridden for weeks at a time. Like the patients, the test subjects must undergo physical therapy to recover their former ability to interact with gravity.

Evolution has simply conditioned the human body to depend on gravity to help it produce the biological material that lets its cells successfully produce new bone and muscle. In a nutshell, humans must interact with gravity to remain healthy. The more vigorously we interact with gravity, such as when we garden, the healthier we remain.